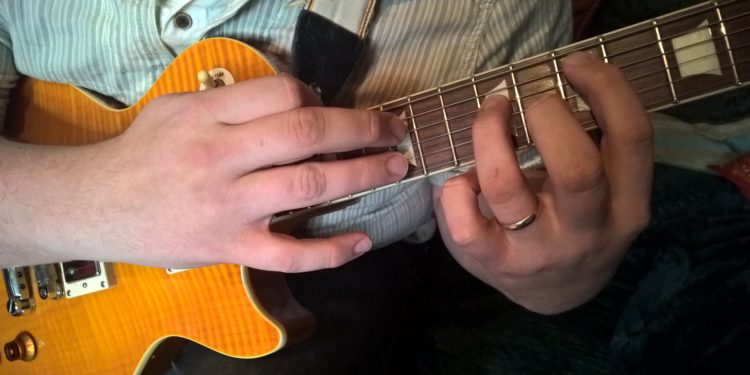 This article follows on from part one, which details an introductory guide to tapping.

This article follows on from part one, which details an introductory guide to tapping.

For a lot of players, tapping brings to mind the 1980’s shredders that handled guitar duties in bands like Winger, Motely Crue and Warrant. This isn’t always the image that guitarists want to project. As a result tapping tends to go in and out of fashion. In my previous article about this technique, we covered the basics. This time around we’re going to look at a few applications for tapping and kick the difficulty up a notch to see how we can use the technique in different ways.

Lick 1:
Here we have a lick that takes a little of what we did in the first article and expands it. We’re going to create a sequence here that could be used as a repeating lead part.

Looking at the first bar, we’re going to divide up fretting duties. The index finger on the fretting hand takes the 7th fret notes, and the ring finger on the same hand deals with the 9th fret notes. The 12th fret D string is handled with the picking hand middle finger, while the picking hand’s ring finger frets the 12th fret B string. We finish this part of the lick by tapping the 12th fret of the G string with our middle finger then sliding it backwards to the 14th fret.

This one is inspired by the likes of Dave Knudson from the Minus the Bear, and Andy Mckee. It uses tapping to make playing a rhythm part and a melody line at the same time more feasible, without having to resort to a classical technique.

RELATED How to Tune Your Guitar – An Easy Guide Using Electric Guitar Tuners
The open notes that run throughout this part can make it seem a little unforgiving. It means that your pull-offs have to be as accurate as possible, to avoid striking any strings below the note you’re on. You don’t have to worry as much about muting this time round though. This is because the piece partly relies on the open ‘harp-like’ sound for the melody line. The guitar is tuned to drop D for this one.

This time the fretting hand is coming up over the fretboard to barre the top two strings of the 2nd, 5th and 7th frets. The picking hand’s middle finger handles all the melody notes from the 11th to the 14th frets. 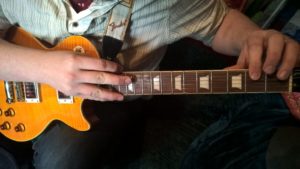 I first saw this technique used at the climax of the 1986 film ‘Crossroads,’ where Steve Vai uses it in a guitar duel. I’ve included a link to the video – the technique is used at around 0.22 mark. Since then I’ve seen it used occasionally by players like Dan Jacobs of Atreyu. He has an undeniable 80’s hair metal influence to his lead playing which this technique is perfect for.

Here we’re going to play through this arpeggio sequence using only the fretting hand. All of your muting should be done with your picking hand, which I find works best placed around the 3rd fret, resting lightly on the strings. You’d be better off using all 4 fingers, as some of the arpeggio shapes are made easier by having the extra reach your pinky finger can provide.

Don’t be taken in by the common view that tapping is just a way for shred heads to show off. It’s important to remember that tapping, as with any other technique, is just a method of playing. As always, take the techniques here and try them out with your own licks.