Scales, contrary to what you might think, are much more than just a laborious task that teachers through into lessons to make sure their students don’t get too excited! You could define a scale as a collection of notes that belong to a certain key. The sound each scale gives is due to what notes are included from the major scale, and also how they have been altered. So, it would make sense to think that understanding music theory begins with understanding the major scale and the relationship between the notes it involves.

This might sound a little bit complicated or boring but this lesson aims to introduce you to the theory of the major scale in a few, easy to understand steps. The first thing to look at is the note values of a major scale. The diagram below shows you the order of notes and their values:

Try and imagine the major scale like a ladder, with each note being a rung of the ladder, and the gap between each note being a step; climbing from one note to the next. Now, obviously, between each note there is a certain step that you should be aware of. Between some notes there is a full tone (equal to two frets on a guitar), and with the others there is a step of a semi-tone (equal to one fret on a guitar). A semi tone is the smallest musical interval there is, so the step can’t reduce any further than this. The diagram below shows you the same notes again, this time detailing the step between each note: 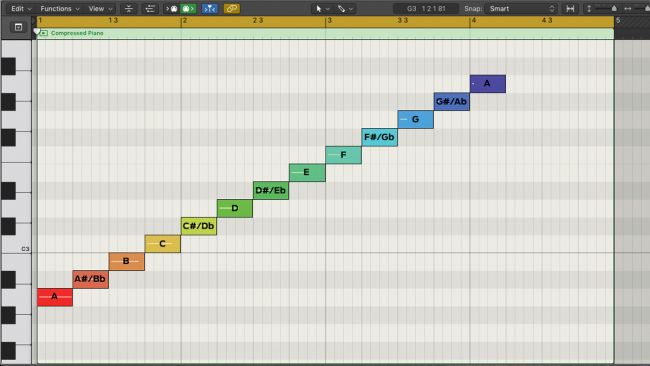 It is the intervals between each note that give the major scale its sound. In particular, the semi-tone steps between the 3rd and 4th notes and the 7th and the root note. The two-tone interval between the root note and the 3rd gives the scale it’s major characteristic.

For example, if you wanted to use this formula to work out the notes needed for a G major scale; start by finding the root note on the 3rd fret of the 6th string. Then, move up a tone (2 frets), then another tone, then a semi-tone (1 fret) until you get to the end of the formula. If you get this right you should finish on the top root note at the 15th fret on the 6th string.

Take a look at the video and the diagram below to see this demonstrated.