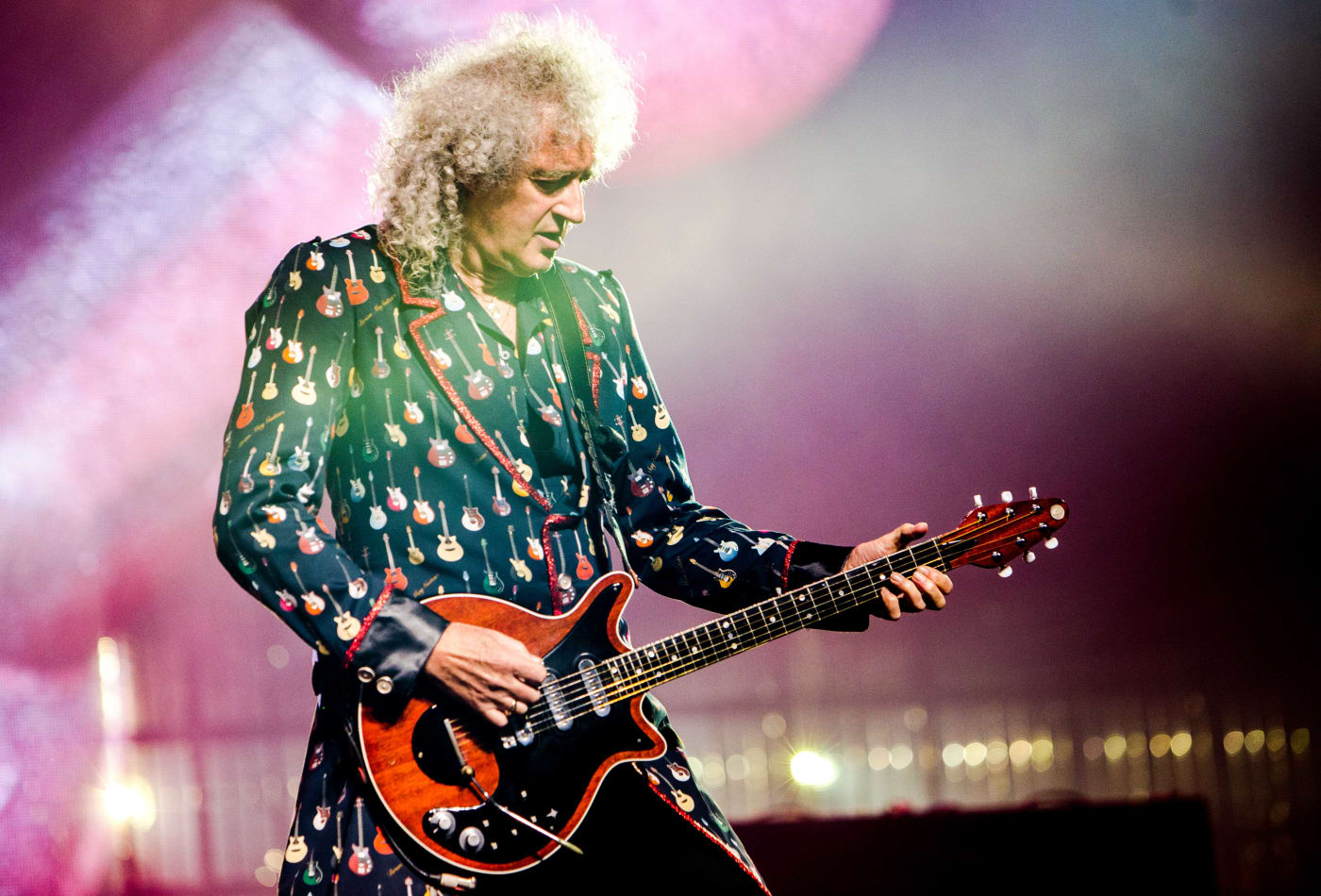 Welcome to a new series here at onlineguitarlessons.co.uk. In this series we’re going to try a different take on articles about guitar heroes. We see a lot of information about what gear they use, what brands they like, and maybe get a little bit of information on how they warm up. This series however is going to try looking a little deeper into how they play and how that affects their sound. So with that said lets introduce our first How to play like subject!

Brian May of Queen has a sound that’s all his own. It’s a rock sound that many have tried and failed to emulate and is largely credited to the gear he uses. In an attempt to prove that’s not true, I recorded all the examples here with my PRS CE22 through a few different Michael Britt profiles on my Kemper. (Admittedly, the one I used for ‘hammer to fall’ was an AC30 profile.) As I’ve already said though, this isn’t sound like Brian May so that’s really as much ‘gear talk’ as I’m going to indulge in.

May’s song-writing is complex but his lead playing is actually fairly simple to decode once you strip away the sound.  At heart May is a simple pentatonic player.

He cites Hank Marvin and Cliff Richards as early influences and you can hear the rock’n’roll running through his note choice. The most obvious example for me would be his ‘crazy little thing’ solo which Brian describes as trying to emulate Elvis Presley’s early guitarist Scotty Moore.

Let’s take a look at two of the licks used in this solo:

May employs most of the techniques you’d expect from a lead guitarist. He’ll switch between alternate picking and legato to add an extra burst of speed when it’s needed.  There are glimpses of hybrid picking as in the second lick from ‘crazy little thing,’ and although he’s not exactly known for it he has employed sweep picking once or twice.

Here’s a sweeping example from ‘Was it all worth it’:

This may seem like an odd example to include but it shows another key element of May’s playing: his sense of timing. Listen carefully, and you’ll notice that the up sweeps are performed faster than the down sweeps. May is a fan of this idea, a strong steady approach quickly followed by an increase in speed for a few notes. This is a hallmark for him, and creates an interesting texture to the sound. Look out for it again later in the article during the famous ‘Bohemian Rhapsody’ riff.

RELATED  The Past, Present and Future of Music [Infographic]

If you really want to nail May’s lead style though for me there’s one simple element. I’ll call it the double back. It’s something I picked up from May’s playing very early on in my playing career and have used it liberally since, here’s an example to show you what I mean:

May will often slightly run forward through a scale and then quickly double back on himself using a hammer on/pull off into a little legato run as shown above. It gives him a slightly erratic sound and subverts the listeners expectation as to where he’s headed next. This contributes to why May’s lead work often seems much more complex than it is.

One final lead trick up his sleeve (or rather at the end of it) is his index finger. Occasionally May will play a violin-like legato line that lacks his usual brightness. It has a softer almost muted quality to it. He does this by extending his index finger and lightly plucking the string right at the end of the neck. You can hear this employed in ‘who wants to live forever,’ at around the 2:15-2:17 mark, it’s shown in the video and has often led to people misinterpreting this as a tap.

Unlike a lot of players, May’s rhythm work doesn’t specifically focus on either single note or chordal passages. As a result he’s a player with great variety. Here are a couple of examples you might have heard before.

Both of these riffs are classic Queen. When you hear them, you know it’s Brian May’s handiwork and yet they’re both drastically different. So why is his sound so consistent no matter what style of rhythm he’s playing?

The answer is – a sixpence.

Brian May uses an old sixpence as a plectrum. He says he started using it because it was slightly serrated and gave him a growly sound. This may be the case, but it has another advantage. It gives him more control over his picking dynamics. The lack of flexibility of the ‘plectrum’ means that all of his picking dynamics come from his picking hand, rather than the plectrum.

So what benefit does that have to his playing?

It allows him to access tonal difference without endless pickup switching, volume adjustment and tone control. I came to this realisation myself when I started using Stone Works picks. The complete lack of any flexibility forced a real change in my playing, and as a result of this I discovered I could do a lot more with just one amp channel.

You don’t need to use an old coin, or even shell out for expensive plectrums to get this effect though. Anything over 1.5mm should achieve the same feeling and allow you to work on that control yourselves.

For me, the thing that makes Brian May such a great guitarist, is something that most players aren’t good at: restraint.

Queen probably aren’t the band that pops into your head along with that word, but it’s true. May never plays guitar in a way that won’t service the song.  When you think about it, guitar isn’t always the main instrument in a Queen song. It jumps in and out of the mix, sometimes present but so quiet that it’s only just audible.  Two of my favourite Queen songs, ‘The Show Must Go On’ and ‘Who Wants to Live Forever’ are perfect examples of this. They’re full of amazing guitar work, but it never overpowers any other aspect of the music.

So to sum up, playing like Brian May means never being reliant on one technique, being controlled and most importantly knowing when to play and when not too. Time for you to go and apply these ideas to your own playing!